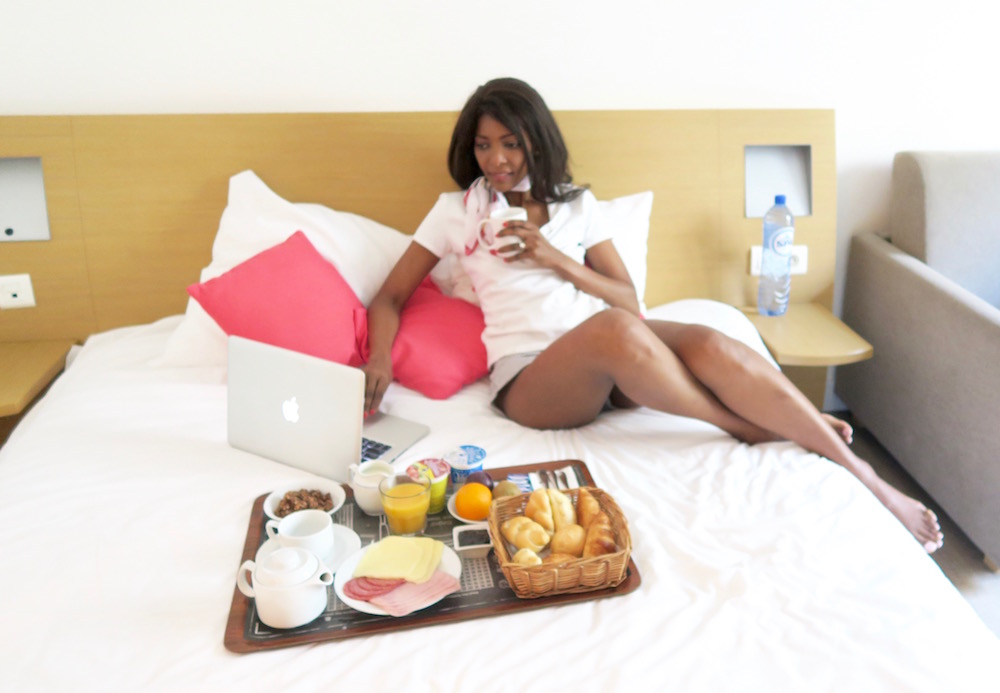 In my hotel room mapping out my day

Prague is often referred to as the golden city owing to its rich history and its many old buildings. Its immaculate squares, narrow streets and impressive small towers attest to the magic of this city which has very few new buildings, thus retaining its old city charm. In my travels, I’ve been to the city many times before, initially when I worked for the EU subsidiary in Brussels and more recently while on duty with the crew. Below, I list eight places to visit on your maiden or next trip to Prague. 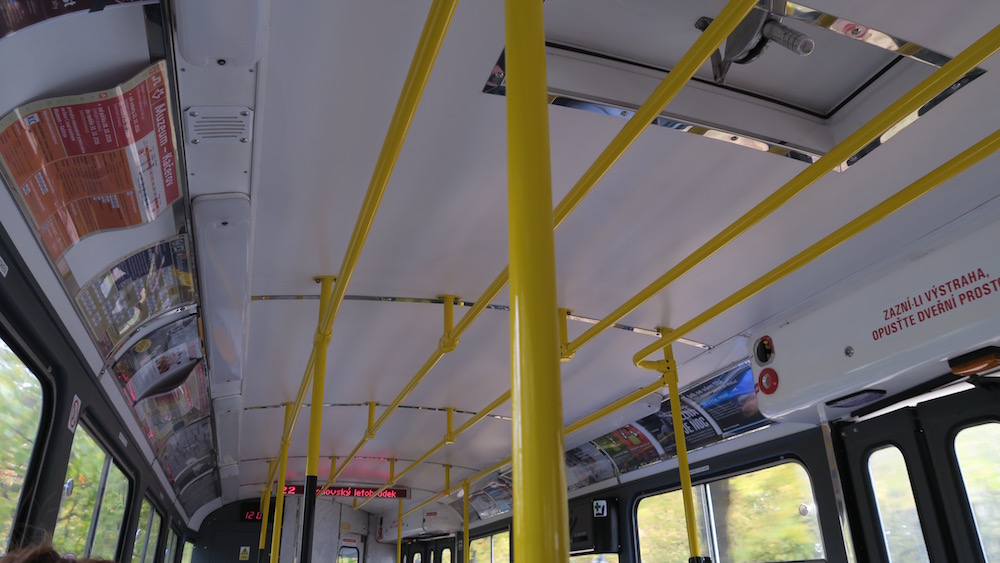 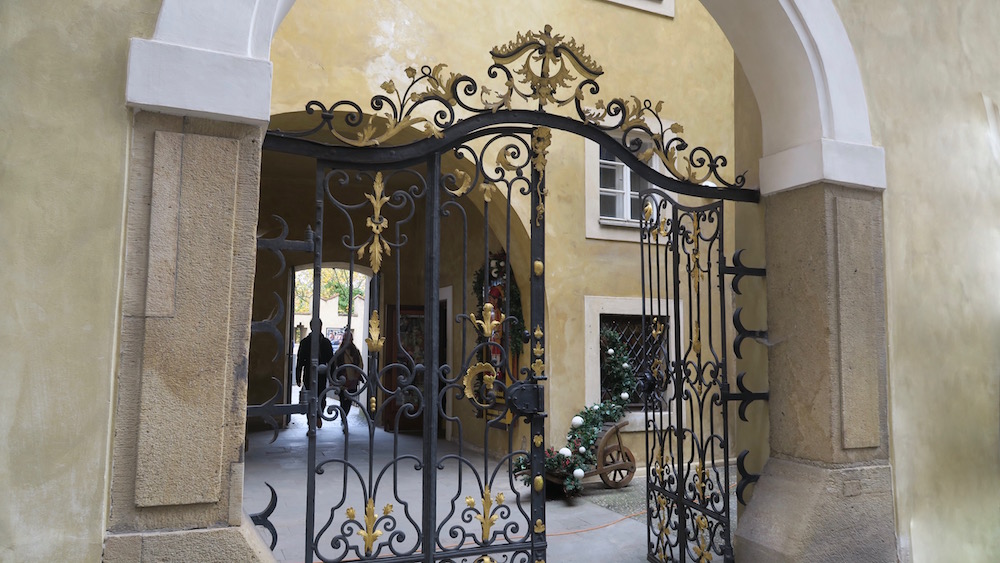 8am early morning, I hopped onto tram number 21 which took about 20 minutes to get to the Prague Castle. I was fretting about how I’ll know where to get off but soon enough I realised everyone on the tram was headed for the same place. And sure enough, the tram emptied out at that stop and we all shuffled through security and onto the castle grounds. Words cannot describe the experience of walking from one square to the next and the next and the next, each more magical than the previous one, if that were at all possible. I tried to capture that euphoric feeling that welled up in me in the video below (Part I) but I don’t think I did the moment justice. After all, it is the official residence of the president of the Czech Republic, and the biggest castle in the world (it sits on about 70,000 m2). 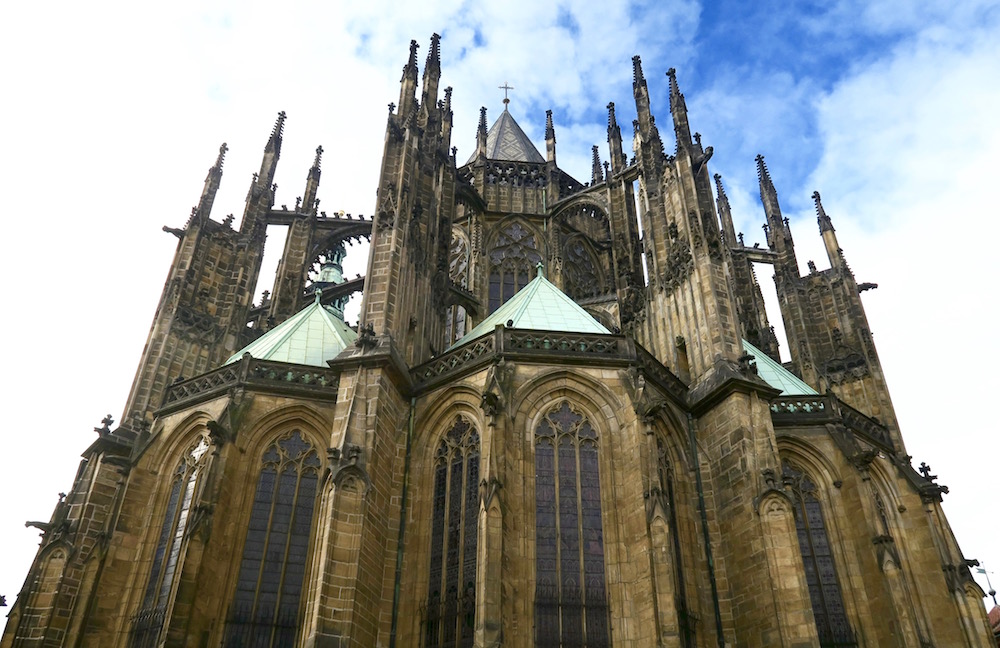 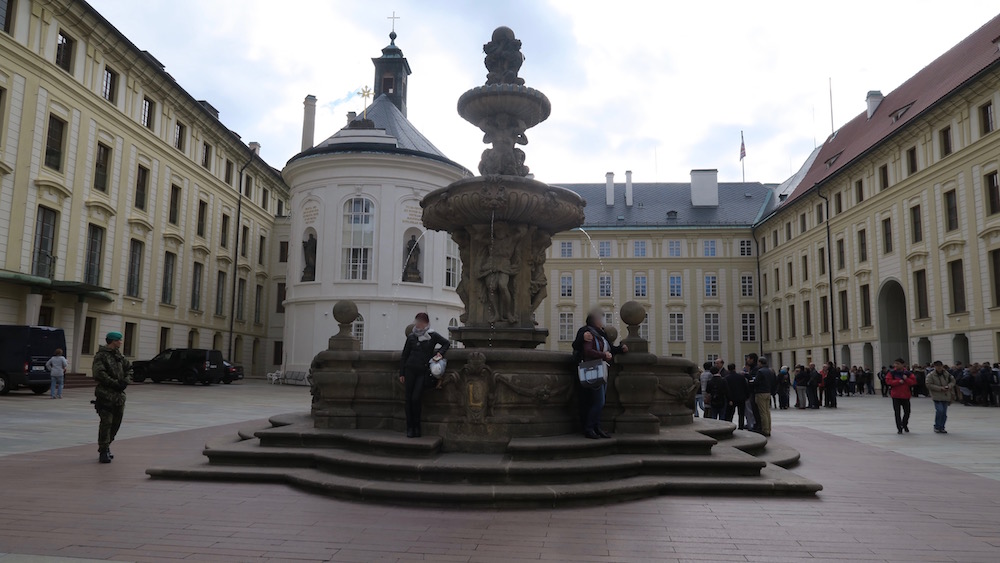 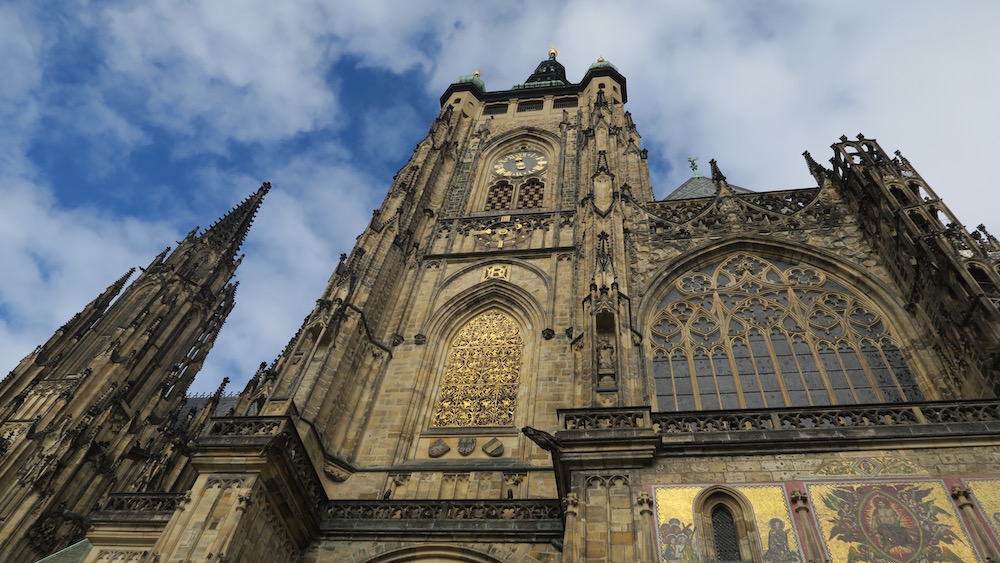 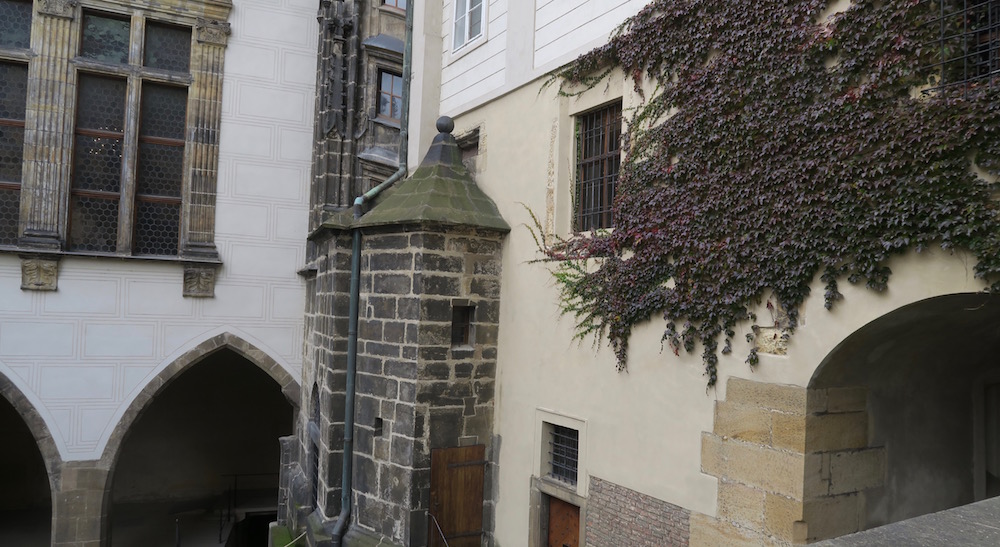 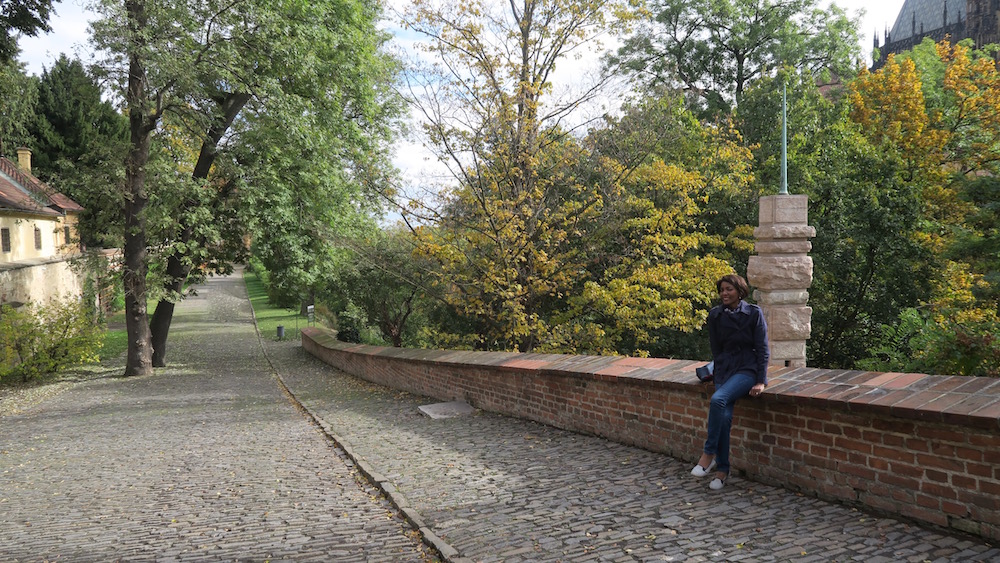 After 2 hours at the Prague Castle (not nearly enough time), I jumped back onto tram number 21 and alighted at tram stop Hellichova where I made my way slowly to the Charles Bridge. Walking down this famous bridge is quite an enchanting promenade. The place is crowded with locals and tourists admiring works created by the multitude of painters and artists lining up the length of the bridge on both sides all year round. A look over to the side of the bridge will reveal any number of boats ferrying tourists up and down the Vltava river. I stopped to enjoy the songs played by the musicians along the bridge, adding to the uniqueness of the experience. I tried to capture this magic in the videos below (both Part I and II). Be sure to walk across this bridge on your way to the Old Town which begins where the bridge ends. 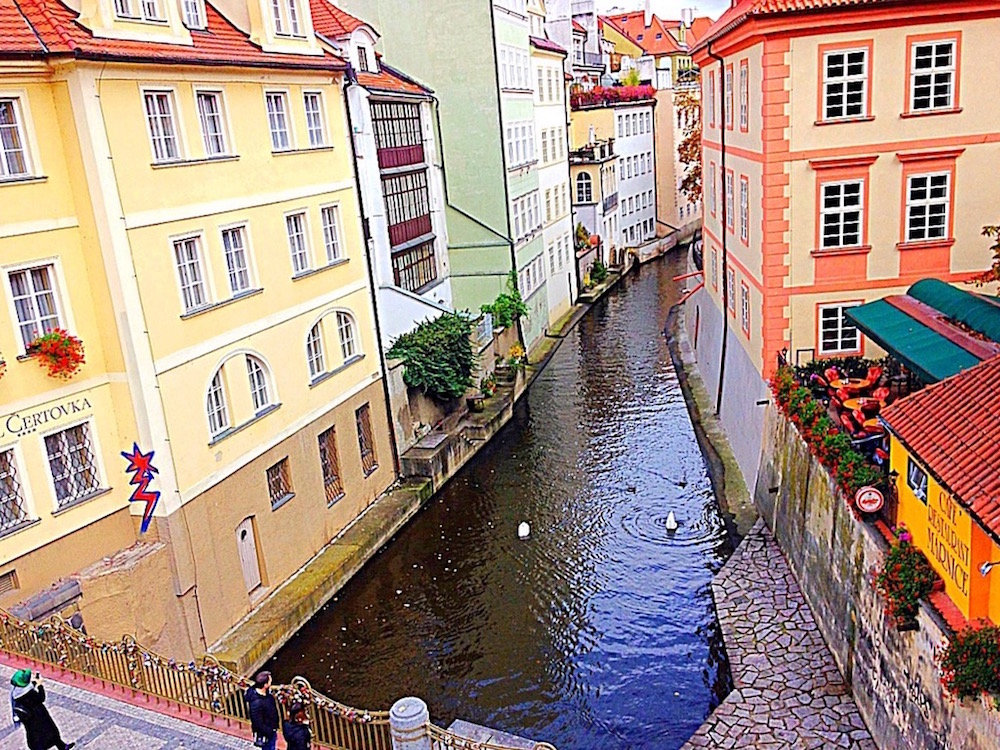 The view from the Charles Bridge 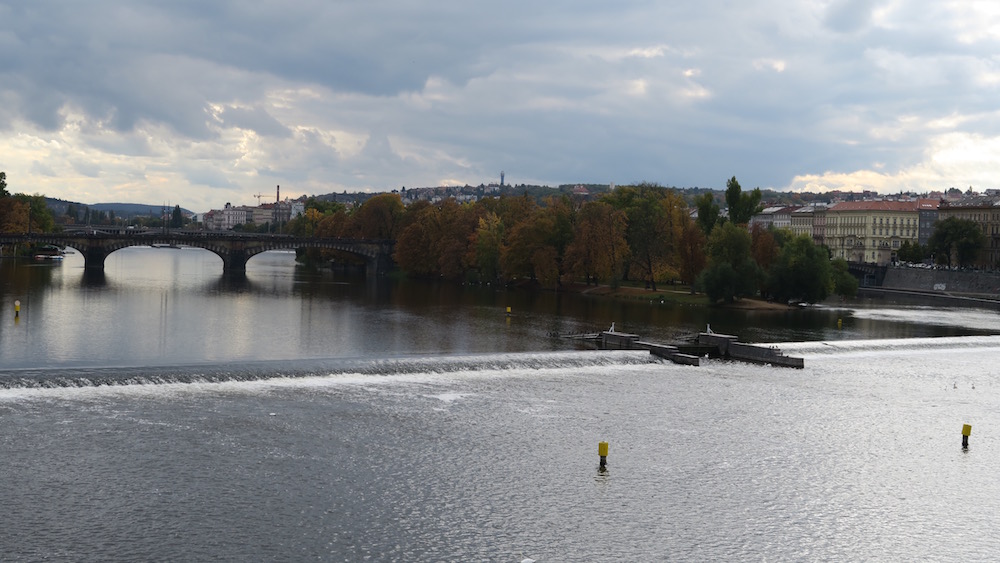 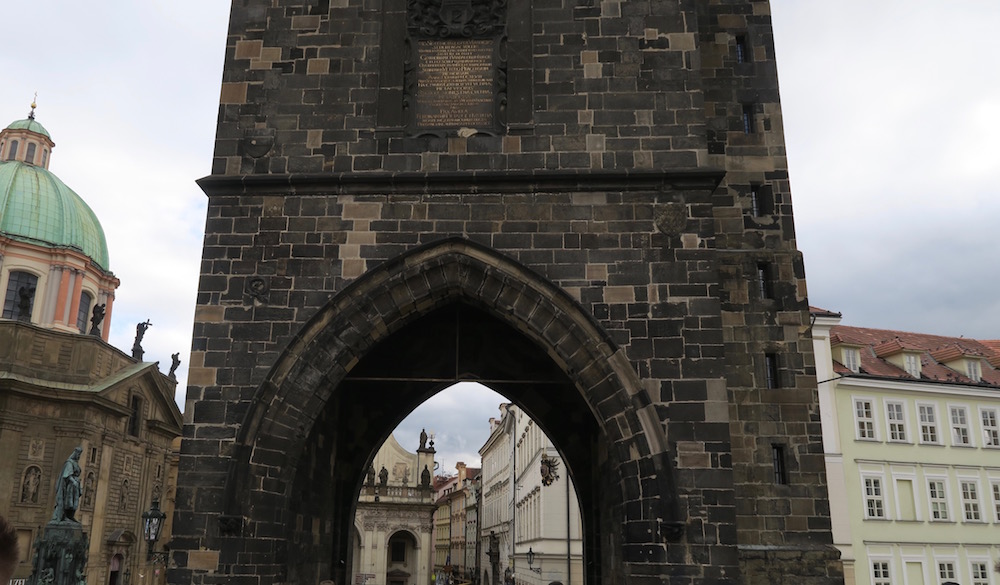 Entrance to the Charles Bridge 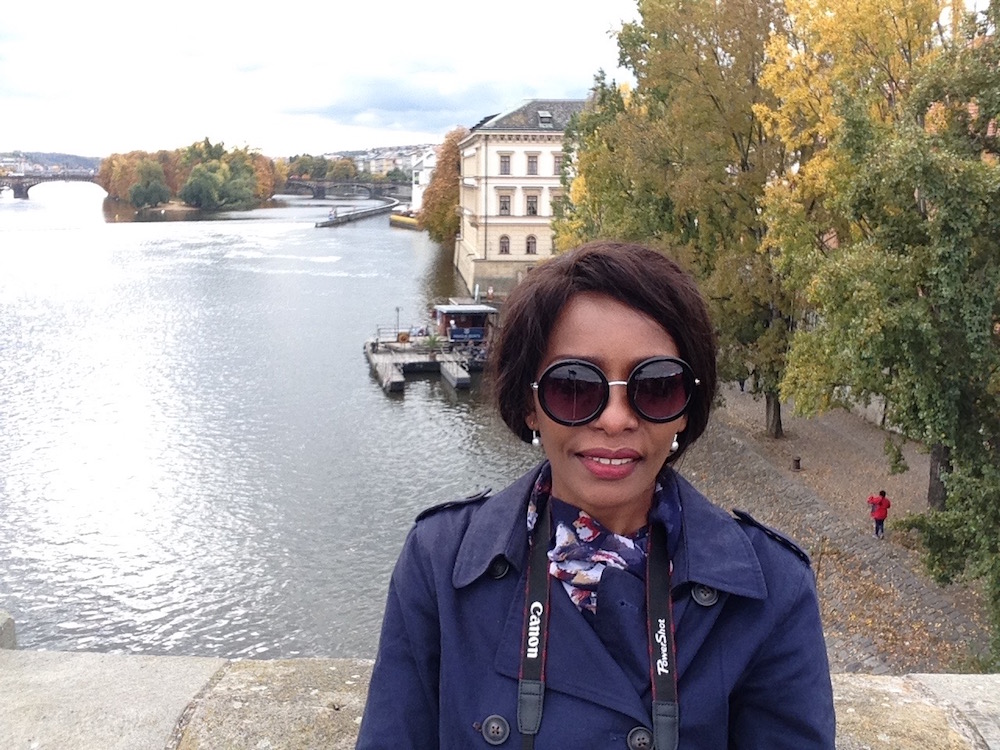 At the Charles Bridge 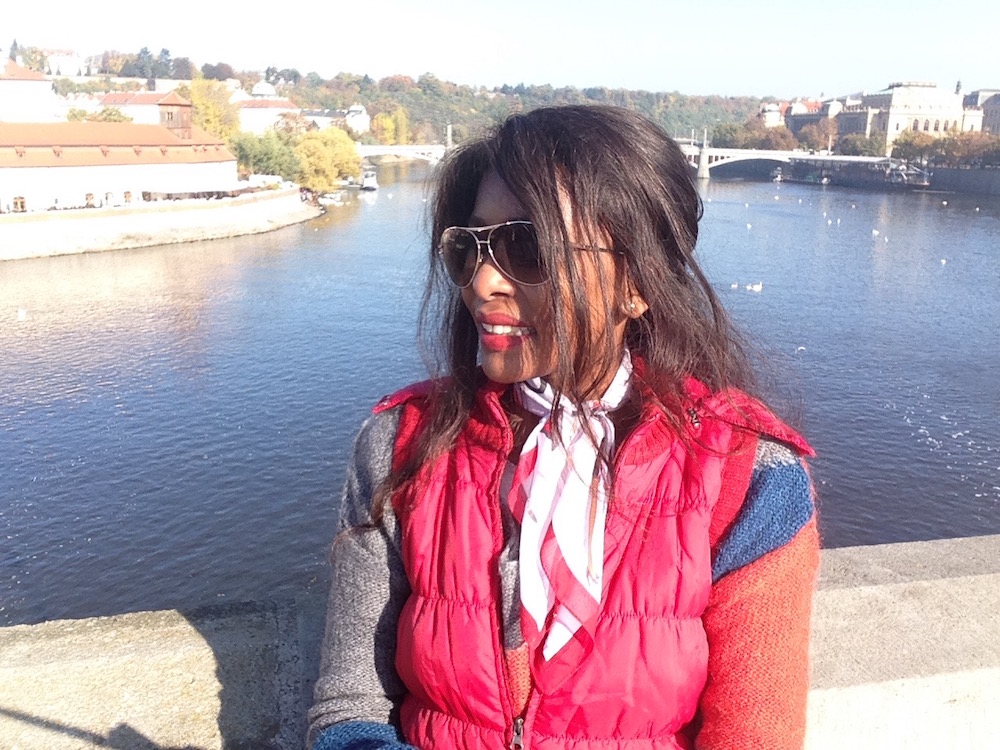 Back at the Charles Bridge

The Old Town is ensconced between the Charles Bridge and the Wenceslas Square. This square plays home to the largest Easter and Christmas markets in Prague with visitors coming from all over Europe and beyond to experience the magic of the city. A visit to the Baroque Saint Nicholas Church is a must for the prayerful, while a visit to the Old Town Hall yields a breath-taking view of the whole square. 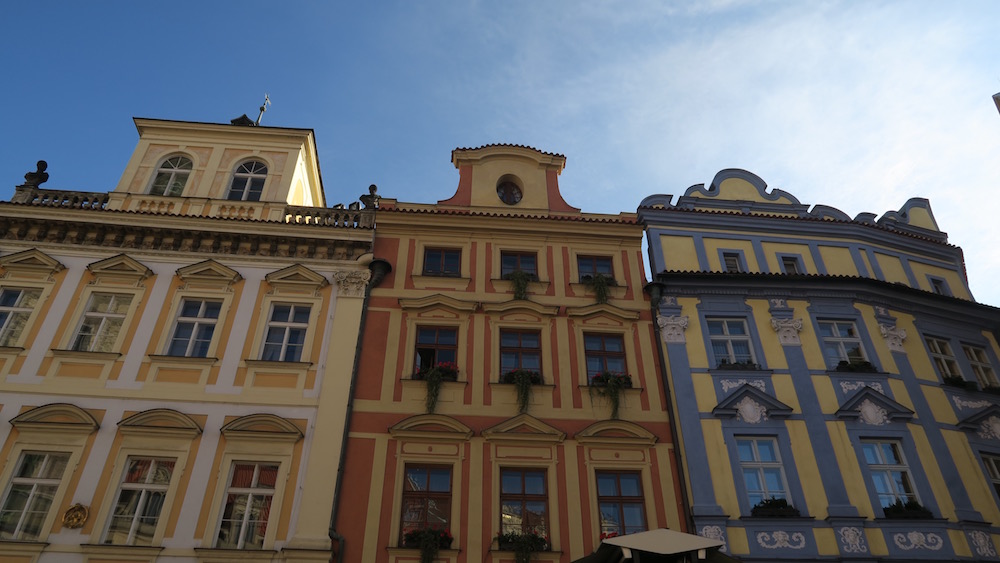 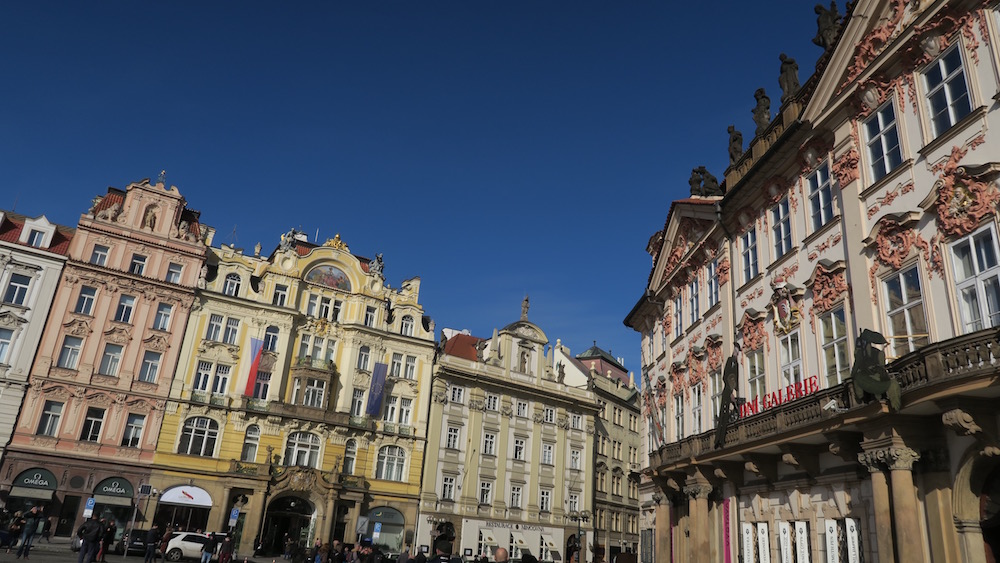 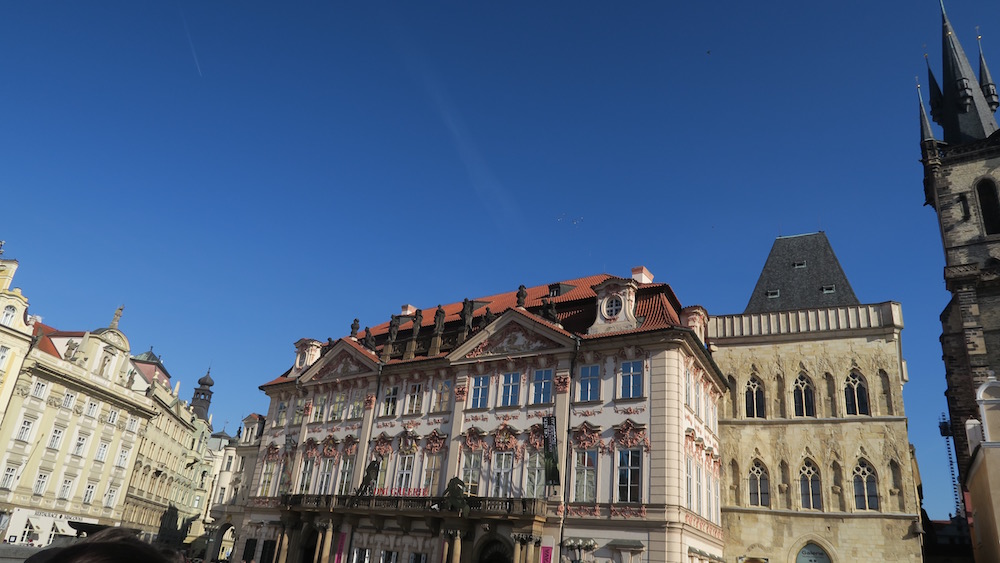 The Old Town Hall houses the Prague Orloj, a medieval astronomical clock that is deeply steeped in the history of the city. Initially I didn’t know how to get there, but I instinctively knew to follow the masses (after my morning tram to the Prague Castle experience), and again, everyone was headed there. The Prague Orloj is locally referred to as the three clocks because it’s composed of three components –the astronomical dial that shows the position of the sun and the moon; a calendar dial with the months represented as medallion; and a clockwork hourly show of moving sculptures, including the ‘walk of the apostles’. I stood in awe, looking up, not being quite sure what exactly we were looking at, or looking for. Yet even my ignorance did not diminish the emotion of that moment as I stood there with throngs and throngs of people milling around, marvelling at the wonder of it all. 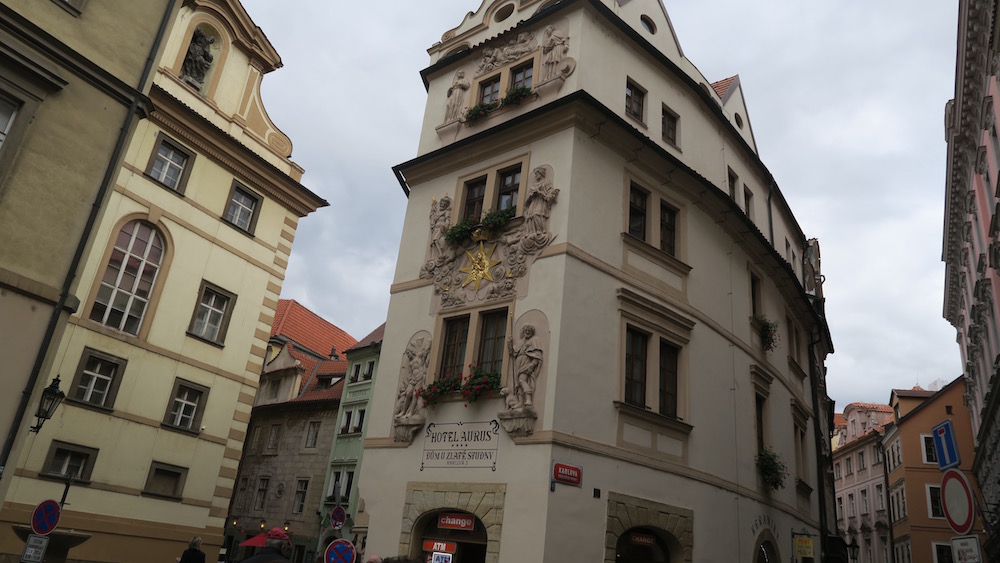 This quarter is located between the Old Town and the Vltava River. It is a sad reminder of the atrocities committed against the Jews in the old Europe when they were all confined to live in settlements away from the comfort of their homes. Lest we forget. Selah. 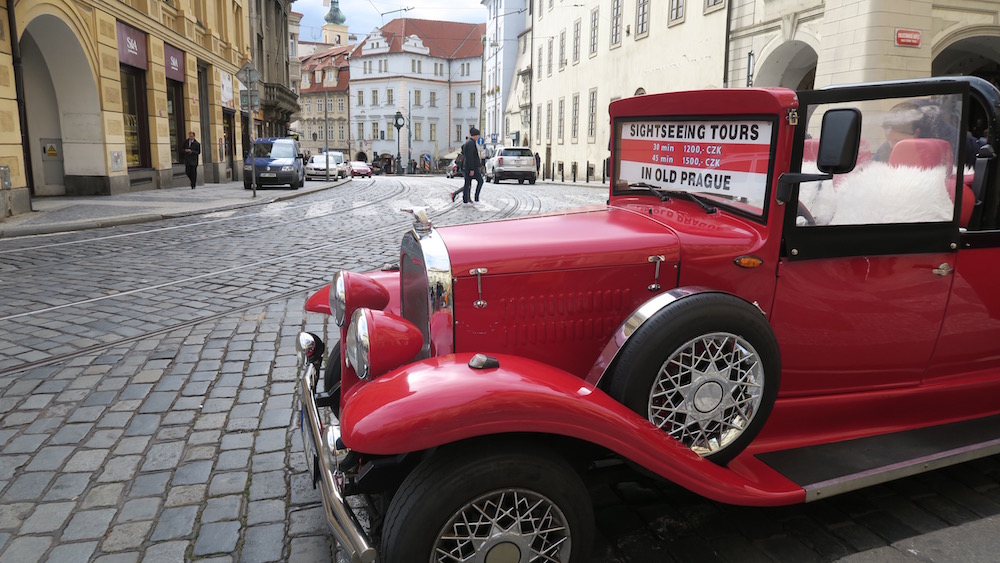 Good way to get around sightseeing

And then ofcourse, there had to be time for some retail therapy. The Palladium is a massive shopping mall with several floors. I got dizzy as I tried to capture the full height of it on video (Part II). It houses all the mainstream shops that we all know so well, plus some unique local shops, where I was lucky enough to score some genuine leather winter gear for my boys back home. There are at least 30 restaurants within the mall so it’s the perfect place to shop and eat. 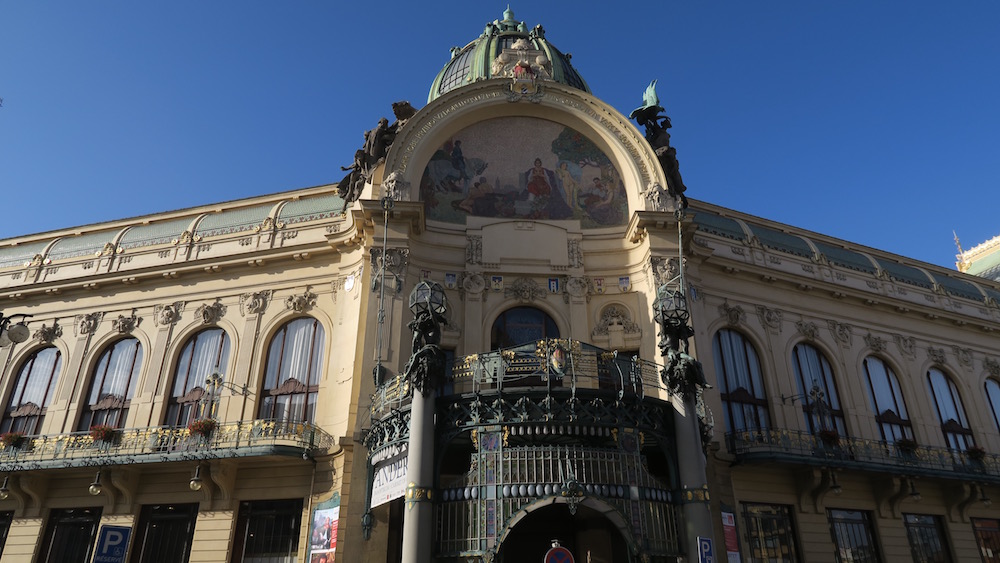 I noticed this statuesque imposing church once I’d retraced my steps back to the tram stop Hellichova and decided to go up the stairs for a brief visit. I love to light candles for loved ones who have passed on so I felt drawn to go in for this very purpose. I love to sit in churches and reflect on life and its meaning and this stop gave me the opportunity to do just that. The baroque architectural interior was beautifully done with gold accents that almost made one feel closer to God, almost. 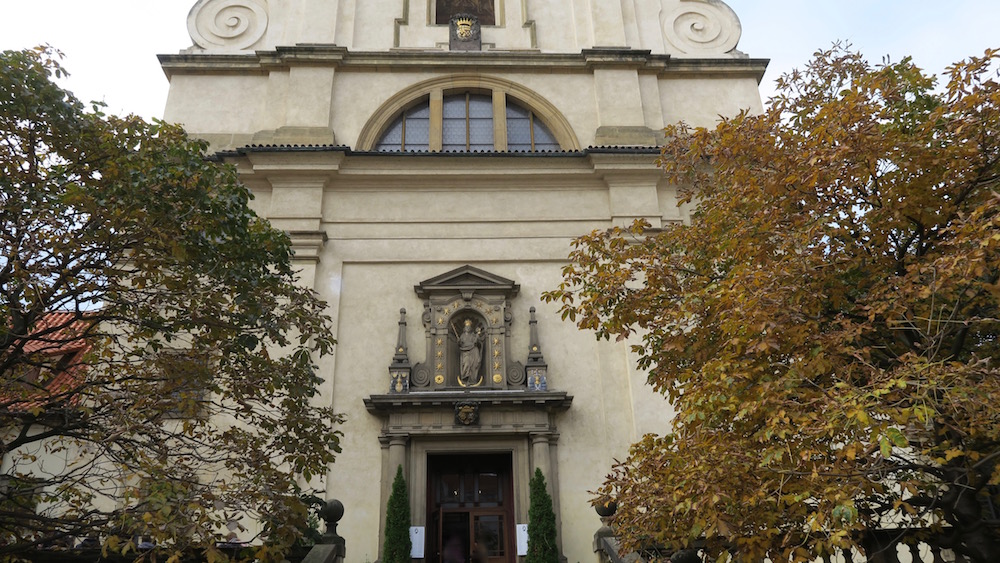 Entrance to Our Lady Victorious 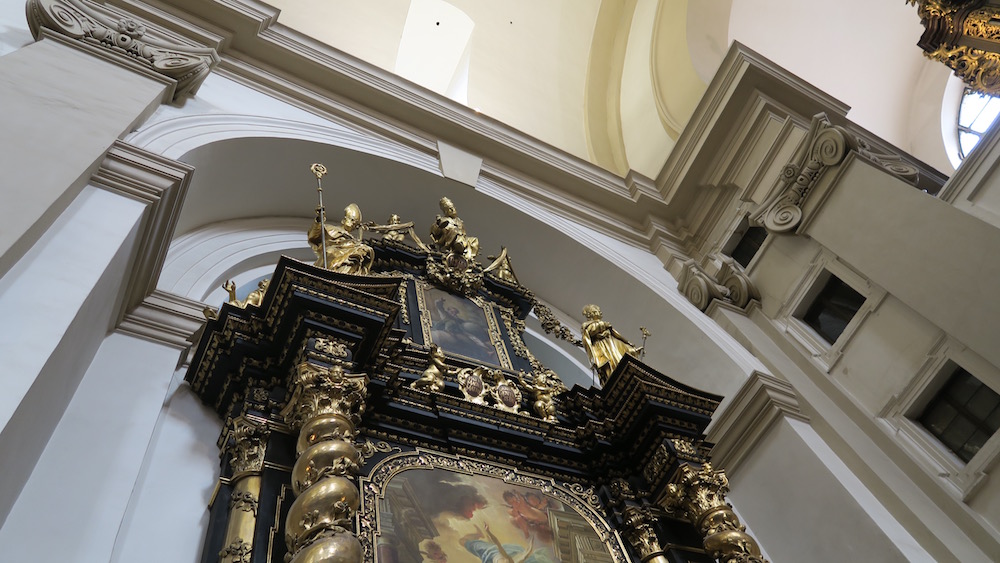 Our Lady Victorious – the interior 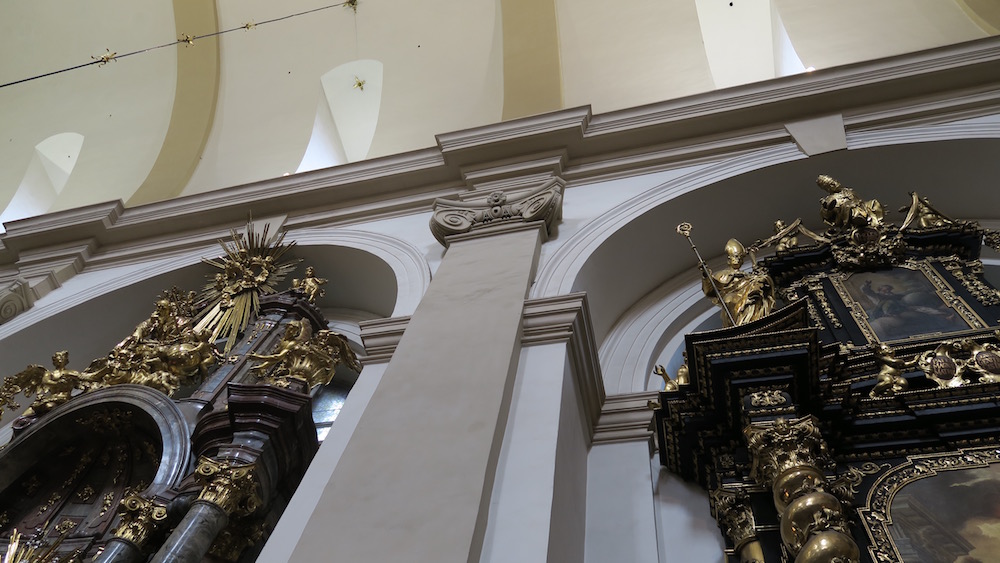 Our Lady Victorious – closer to God 🙂

Our Lady Victorious – closer to God 🙂

I eventually left the church and jumped back on tram 21 where I was headed for the hotel when I spotted what was clearly yet another busy shopping street with all the familiar fashion retailers. As if I hadn’t bought enough already, I instinctively jumped off the tram as it came to a stop and headed for the busy shopping street to browse through the shops for anything I might have missed. After picking up yet another pair of leather boots, this time for myself, I looked around the back and found this massive moving sculptured head on Dusni Street. I later found out it’s called the rotating Franz Kafka Sculpture made by renown Czech artist David Cerny in honour of Franz Kakfa, a celebrated Czech writer. Installed in 2014, the sculpture has 42 independent layers made of stainless steel and weighs 45 tonnes. 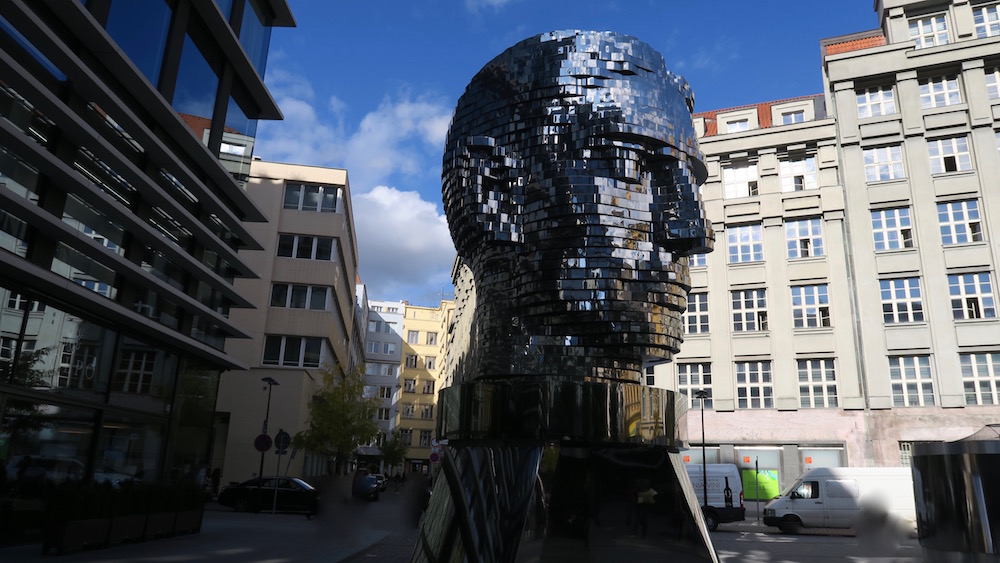 I finally jumped back on the tram headed toward Pavlova and made my way to the hotel, weary, laded, and happy. I hope to come back to Praha again and again as I am sure there is more of this enchanting city to discover. 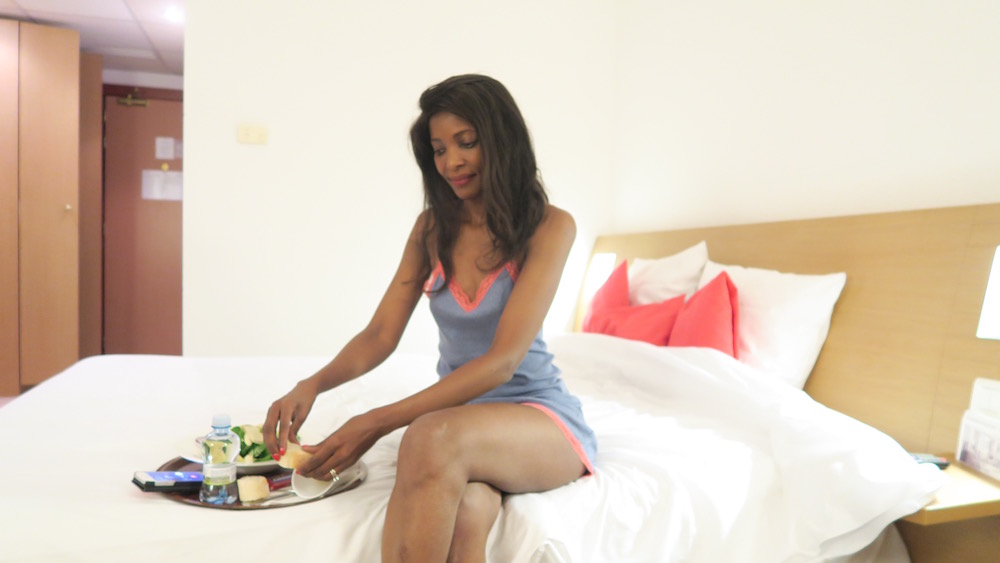 Back in my hotel room for dinner

I hope you enjoy the pictures and the video. Until the next time fellow sojourners, as they say ‘bye’ in Czech, Sbohem!